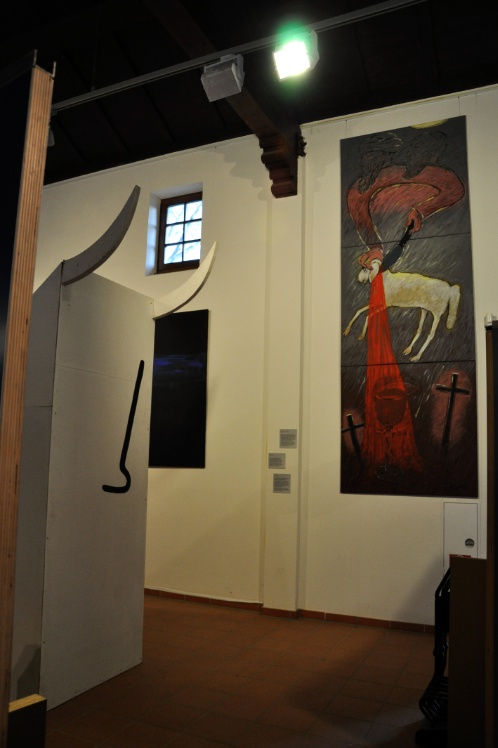 Farangis’ first series of works evolving around mithraism: “For Example Mithras Part I” addresses the Roman practice of the cult. She thematizes how an act of killing, the sacrifice of life, has been tied to human ideas of a salvation ….

In dying and bleeding to death ritual transformation sets on: new life thrives from death. In unbounded chains of expectancies for deliverance, humanity proceeds in harrowing spans. The victim’s death in religious rites such as in the mystery of the Mithras cult (where the steer is being ritually killed) as well as in the rites of the Abrahamic religions Judaism, Christianity and Islam, stands as a blood-sacrifice for expectancies of salvation.

Any obedient servant can kill on a “God’s” behalf who represents absoluteness in will, knowledge, power, perfection. And this specific form of a “holy” entitlement is where the tragic lies. The life sacrificed is not regarded in its sanctity of being a living being – it’s becomes the means to an end …

In many blood-sacrifice rituals the pretence is demonstrated that the “sacrificer” (the slaughterer) is guiltless. Mostly it’s the priests of the specific religion, who as agents of divine decree, carry out the slaughtering. But also any one of the believers that are devout and obedient to God themselves can slaughter the animal sacrifice and perform the sacred rituals.
Intentional killing through the hand of man – natural dying, is there not a mistaken confusion? When we recite for example the text from the Bible: “Verily, verily, I say unto you, Except a corn of wheat fall into the ground and die, it abideth alone: but if it die, it bringeth forth much fruit.” (Jhn 12:24) aren’t there two different forms of dying and two different forms of coming to life with all living beings, since a dying grain can’t be set against the blood-victim.

In Farangis Yegane’s neo-mithraic interpretation Mithras finally leaves the vicious circle that leaves him between choosing to kill or not experience redemption. And instead of obeying the God Sol in the first place ( – Sol in the mithraic mythology is the one who decrees Mithras to slay the Primeval Bull representing the “all-life”), Mithras succumbs to the power that lays in the freedom of the natural elements – the wind, the fire, the sun, the night, the heavens and earth – the animals – the raven, the snake, the scorpion, the dog, the bull. Farangis puts the question about the cosmic order into painting.

The second series of works dedicated to Mithraism by Farangis: “For Example Mithras Part II” reaches back to the pre-zoroastrian Persian roots of “Maetha” (Mehr, Mithras). Here we find the life affirming clarity of an early mythology that kept its fascination even after histories dilution over the course of time …

Cautes and Cautopates, the torchbearers, lead the birth of night to day, of day to night and represent the ‘time-creating’ cycle that the sun visually mirrors to the earth, when the earth and the moon revolve around it. We see how mythologemes interact on ‘The Suncircle’, the rockbirth, the Dieburg refliefs depiction of the trinity in Mithraism with three heads with phrygian caps showing up on the three-branched three, the serpent, the scorpion and the dog – but no slaying of the bull. A anthem for life with lifes colorfulness …

A wide sky and circling suns, as symbols of the visual daily progression of the sun, emphasize the rhythm of light. Holding one torch upwards and one torch downwards, the torch bearers Cautes and Cautopates indicate the direction of the light, and at the same time they allude to the coming- into-life and light, and to the cessation-of-life and darkness.
A cosmical order does not leave anything disappear into an eternal darkness nor does the life-creating brightness incessantly rule our lives.

See all the works in detail and read about them, links