Speciesism in art is for a big part taxidermy in art

This site writes: “Well they are dead anyway” … http://www.ravishingbeasts.com/taxidermy-artists/

But they exactly use the dead bodies of nonhuman animals because these animals obviously have lived before. Using a dead body is a means to gain possession in a definatory way over the de facto existential part of a living being – even when the individual is dead. Obviously there is a meaning of the procedure and use to the makers and onlookers of “taxidermic art”, because otherwise they could be using their own skills to sculpt their ‘works of art’ instead of using the physical remains of an animal body.

Taxidermic “art” is a way to grievously ridicule the fact that nonhuman animals are victimized by the majority of the human societies (people used human bodies in a comparable objectifying way).

Taxidermic “art” stands on the side of the human speciesist majority, in that it implicitly supports the normalcy that this majority segment of society has established. You are allowed to see the animal body as an object – not more and not less.

Taxidermic “art” uses a dead individual’s body – a body: a temple of any living being’s existence. Anybody who omits this scale of animal subjectivity automatially sides with the speciesist stance.

The kind of artists/arts that employ taxidermy and their audience rub into your face what they feel is “art” to tell you something that I would sum up as: ‘Look what we can do, look what we do to the inhabitants of this world. We care, but in a destructive and derogatory way.’

Effectively this type of artistic expression is an attempt to mute animal rights and antispeciesism, their ignroance towards critique comes across like an attempt to push other stances into absurdity, by using the cynicical rethoric toward animality and by riding comfortably on the wave of the overall lack of self-critique in contemporary art.

Animal objectification is an accepted visual rhetoric that gives the artists a means to silence ethical non-relativism and any critical and moral standpoint on the display of animal bodies in art.

What this art also is doing is that it is catering to the oppressive patterns that we have in our societies. In a way much of the mainstream art does that today, simply by voluntarily reducing self-expression to speaking in just one single language of aesthetics, thus supressung basic individuality and plurality in artistic expression.

Speciesist and nature-derogative art marks the spearhead of ideological human destructiveness though. While amongst humans people tend to act as if they are “open for discussion” , speciesist and nature-derogative “art” seems to voluntarily or involuntarily make clear that the capacity of free thinking, that humans claim for themselves, is merely a hatred for the existential realities and the independence in the meaningfulness all other existence.

Here is an interesting example of an artist doing what she calls “vegan taxidermy” : http://www.vegantaxidermy.com/. A nice and interesting artistic project. (One could imagine abstract forms of such arts too.)

I’ve been mentioning taxidermy in previous posts, many speciesist artists use dead animals or their body parts. One of the most famed ones being Bansky, who is considered infallibly subversive by his fanbase and media https://www.farangis.de/blog/wurst. 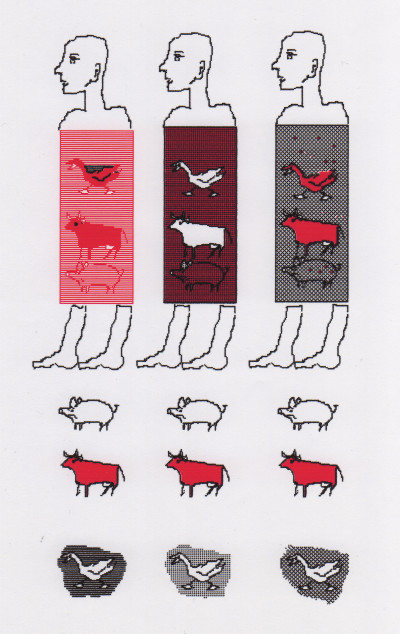 Speciesism comprises the conscious element of violence and active or witnessed (onlooker-) brutality towards a nonhuman animal or nonhuman animals in general.

The consciousness in brutality in speciesism often get aestheticized by putting the act of violence in the frame of doing something supposedly noble, dignified, heroic, “cool”, smartly provocative.

Aesthetics can normally also be a part of a momentum that breaks any chain of self-deception, and be a vehicle to relate to the experienced world. The sense of aesthetics isn’t something value-free, it’s something that depends on the motivations in an onlooker or an artist.

Does the aesthetical understanding in a person seek to rectify her actions and worldview only, and is thus just a means to an end? Or is the sense of aesthetics really the sense of connecting to the outer real world that’s being perceived?

Killing nonhuman animals as “art”. Yet another patho… case doing just that. No comment, yet again it speaks for its own state of pathology.

Amber Hansen is to be found at: http://vimeo.com/user5118234 and http://www.amberhansen.com/home.html, who she is? Just read this:

STEVEN F. EISENMAN
Professor of Art History
Northwestern University
The following is the email letter I sent to the Spencer director, curator of modern art, and curator of contemporary art:
Dear Dr. Hardy,
I read with interest that your museum is planning an exhibition called, “The Story of Chickens: A Revolution.” As a scholar of modern art, and historian of the image of animals in art (the subject of my forthcoming book), I must tell you that there is nothing “revolutionary” about your exhibition or its subject.
The depiction in words and images of the killing or exploitation of animals for the purpose of encouraging kindness extends back more than two hundred years. Such works — and John Lawrence’s profusely illustrated treatises circa 1800 come to mind — always supported the most conventional of beliefs: that humans are the crown of creation (the pinnacle of the “Great Chain of Being”) and possess the God-given right to own, exploit and kill any animal, so long as the slaughter is done humanely. This line of reasoning — sometimes called “welfarist” — has sanctioned the killing of billions upon billions of animals every year, usually in the cruelest manner imaginable.
What is avant-garde, even “revolutionary” today — because it refutes the cruel, old stereotypes — is the view that animals are sentient creatures who possess a right to life and autonomy. This perspective is embraced by many scientists, (such as the pioneering ethologist Donald Griffin) philosophers (such as Bruno Latour) artists, (including Sue Coe), and writers (for example J.M. Coetzee).
In the interests of a progressive museology and simple humanity, I ask you to cancel the planned exhibition, “The Story of Chickens” and to renounce any killing of animals for the sake of art-making.
With respect,
Stephen F. Eisenman
Professor of Art History
Northwestern University
(Curator, “Gauguin: Artist of Myth and Dreams,” “The Ecology of Impressionism,” “Design in the Age of Darwin,” etc.)
———————–
ELIZABETH SCHULTZ
Former faculty member of the University of Lawrence
Member of the Board of Directors of the Spencer Museum of Art
To: Spencer Museum of Art:
Last night I received the following news regarding an upcoming event at the Spencer, and I must say that it causes me deep concern. Although I recognize the SMA’s desire to engage our community in provocative and meaningful discussions (and I must assume that this is the visiting artist’s intention as well), I am nonetheless distressed by the Spencer’s decision to endorse and encourage a project which sponsors the actual (not figurative) deaths of five animals.
It is disturbing to me that the Spencer would be associated with the slaughter of these animals, especially after they had been well and even lovingly cared for within the museum for a month. Certainly, the project forces viewers and participants to consider the inhumane treatment of millions of animals in slaughterhouses throughout the US and the world and the disjuncture that is made between the living animal and the consumption of meat. I question, however, whether the Spencer needs to enact the final part–the chickens’ slaughter–of Amber Hansen’s project in order to make these points. I feel strongly that the entire project demonstrates human power over and control of animals (the androcentric position, perspective), which is crucial for us to acknowledge, but that its culmination in their planned deaths and a gourmet meal is cynical and fascistic. Although the deaths would occur off site (away from the museum), I feel that the museum would be tainted, blood-splattered forever.
I very much hope that the Spencer’s program planners will 1) consider alternative ways of asking questions about the complexity of humans’ relationships with animals in general and about the implications of the corporate meat industry in particular and 2) eliminate this particular project from its spring programming. I certainly will be glad to discuss this with you in person. Elizabeth Schultz
———————
SAVANNA SCARBOROUGH
To: Spencer Museum of Art:
This project would be more aptly named, “The Story of Chickens: A Betrayal.” The description of Hansen’s proposed ‘art installation’ is a sanctimonious crock, exceeded only by her alarming lack of consciousness and clarity of intention within the project itself. If volunteers and community members became true guardians of these birds, and came to see and care for them as the sentient individuals they are, they would not in good faith then turn on their friends, watch their murder, and shamelessly eat them the next day. I would personally view that as a form of cannibalism. Children are naturally keyed in to the natural world, sensitive to their true connection with non-human animals; they haven’t yet been desensitized by society to put on their blinders and to accept the false proposition that certain animals are our food and other animals, our companions. They also get the inherent betrayal of trust when animals they’ve cared for and raised are then slaughtered.
If Hansen were to present an ‘art project’ that would begin to challenge the hypocritical bias of the kinds of megalomaniacal assumptions about food animals corporatocracy promotes, it might merit approval as a kind of revolution, though I wouldn’t be so unctuous as to call it art; leave that to great artists! I fervently ask that Spencer Art Museum withdraw its support of Ms. Hansen’s ill-conceived project, because not only is it not art, it contradicts and turns into a sham the deeper, more truthful meaning of her statement: “Interacting with animals allows us a more complete understanding of humanity; it reminds us of our relationship with the natural world, and our responsibility in caring for it.” Savanna Scarborough

And artists do usually want to be very special to stick out, to make themselves a name, create themselves fame, etc. No actually no, being a speciesist doesn’t make you special in the arts scene unfortunately, but still in particular young artist women who seem to mistake mainstreamism as subversiveness as long as it involves degrading nonhumans, seem to get enthralled by turning arts into their own little speciesist necrophile playground.

Taxidermy can’t be understood as something morally clean ( https://www.farangis.de/blog/wurst ). Some http://looovetinkebell.com also known as Katinka Simonse belongs into the vast array of conquistadoritas who seem to want to have invented the wheel of speciesism new – practically, theoretically she is most likely not even aware of this -ism (or even any other connected -isms). Ms Simonse is yet another one of her kind. You can compare her attempt of mixing aesthetics with destructiveness with the other artists whose names I listed on this blog and you will find out she is not really as special and she might try to be.

What all these arts interested speciesists do is pretty much self-explanatory as much as self-circlingly allo-destructive. (The list will however have to be added to.)