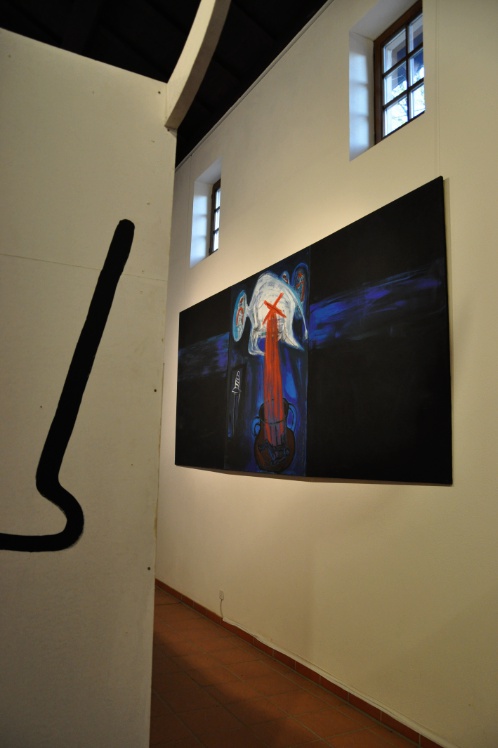 Mithraic Symbols in the work of Farangis Yegane. By Payam Nabarz.

In this Greco-Romano-Persian Stellar religion, the individual’s soul is seen to have descended from the starry heavens to earth and at death the soul makes its journey upwards again into the firmament, a vision similar to the Biblical vision of Jacob’s ladder. The initiatory system allowed the neophyte to become familiar with the cosmos, and learn the star ‘signposts’ which would have allowed his return journey to be smoother and reach a state of henosis (union with the divine, the source). The cave-like temple, (a Mithraeum) was a representation of the universe; here the initiate ascended through various planetary degrees and learned about the constellations and their meanings.

In the exhibit piece ‘Stairs’ https://farangis.de/mithras/exh/15-5stairs2b_800.jpg we see the even Planetary initiatory grade shown which lead to Mithraic heaven:

The first Grade and step is Corax, leading upward to the seventh Grade the Pater, at the top.

In the exhibit pieces ‘Mithras Slaying the Bull’, ‘Winds’ and ‘The Sacrifice in the Abrahamic Religions’

We see interpretations of the central iconography of Mithraism. This is the ‘Tauroctony’ or the Bull Slaying; this was a representation of the night sky, and structure of the Mithraeum building lends itself to contain all the symbols of the macrocosm. One of the Mithraic Mysteries is that the bull slaying scene is a representation of the constellations Perseus (Mithras), Taurus (bull), Canis Minor (dog), Hydra (snake), Corvus (raven), and Scorpio (scorpion). The wheat is the star Spica (the brightest star in the constellation Virgo); where the knife enters the bull, it is the Pleiades; the life giving blood of the bull is the Milky Way. Here the initiate Miles is seen rising with blood of the Bull, the Soul path of Milky Way. Hence, the initiate is being saved and reaches heaven in the similar manor to blood of Christ that saves the believers. The Mithras slaying the Bull of Creation occurs at the dawn of time and was not a sacrifice to be repeated by slaying of actual bulls in temples.

In the exhibit piece ‘The Sun Circle’ https://farangis.de/two/mithras/pageone.htm and https://mithras.farangis.de/exh/insc.jpg  We see the two torchbearers, Cautes and Cautopates, whom symbolise the equinoxes. Cautes’ torch is pointing upward: the spring equinox. Cautopates’ torch is pointing downward: the autumn equinox. The stations of the sun around the year are therefore marked and recognised.

These key images around the central Tauroctony scene are important because they contain a creation story. In the beginning Mithras is asked by the Sun to kill the first bull, but he is reluctant to do this. The Raven, the messenger of the Sun, comes to him again with the message. Mithras goes into the field and captures the bull, and with his might, lifts the back legs of the bull over his shoulder and drags him to the birth cave. The crescent moon over s we see in ‘The Sun Circle’, the bull and his carved horn symbolise its connection to the moon. As Mithras kills the bull, from his blood come wine and all the plants that cover the earth. The tail becomes wheat, which gives us our bread. The seed and the genitals of the bull are taken to the Moon Goddess and purified, giving rise to all the animals. Hence, by this slaying of the first bull, life comes onto the earth. The new life on Earth is growing very slowly, due to drought. Mithras as the mediator between Heaven and Earth is asked to solve this problem; however, this means a conflict with the Sun, who has been burning the land. The battle between Sol (the sun) and Mithras results in Mithras overcoming the planetary sun and becoming the Invincible Sun.

The symbol and concept of life giving blood and being saved is further demonstrated in exhibit pieces https://mithras.farangis.de/exh/bullgrey.jpg and ‘The Sacrifice in the Abrahamic Religions’ https://farangis.de/two/mithras/pagefour.htm

Mithras is also referred to as: ‘And you saved us, after having shed the eternal blood.’

He is also the referred to as kosmokrator (ruler of cosmos) and also rules the movements of the earth and the seasons as his number is 365, number of days in a year. In making their Hermetic ascent, the Mithraic initiates were making astral journeys and making preparations for their final destination; returning to the Milky Way (blood of the bull of creation). The principle of ascension is the reversal of the process of birth on Earth; the souls entered via the constellation of Cancer, the point of genesis and left via the constellation of Capricorn the point of apogenesis. The Neoplatonic based ideals allows the ascent of the soul through the planetary spheres, an initiatory voyage to purify the divine aspects hidden in mankind from its contact with matter from birth.

Payam Nabarz is author of ‘The Mysteries of Mithras: The Pagan Belief That Shaped the Christian World’ (Inner Traditions, 2005), ‘The Persian Mar Nameh: The Zoroastrian Book of the Snake Omens & Calendar’ (Twin Serpents, 2006), and Divine Comedy of Neophyte Corax and Goddess Morrigan (Web of Wyrd, 2008). He is also editor of Mithras Reader An academic and religious journal of Greek, Roman, and Persian Studies. Volume 1(2006), Volume 2 (2008) and Stellar Magic: a Practical Guide to Rites of the Moon, Planets, Stars and Constellations (Avalonia, 2009).

The Mysteries of Mithras: The Pagan Belief That Shaped the Christian World’ (Inner Traditions, 2005), by Payam Nabarz.
Roman Cult of Mithras, by Clasuss Manfred, (Routledge; 2001).
The Origins of the Mithraic Mysteries: Cosmology and Salvation in the Ancient World by David Ulansey, (Oxford University Press, 1991).
Beck, Roger; The Religion of the Mithras Cult in the Roman Empire: Mysteries of the Unconquered Sun; 2006;Oxford University Press;Oxford.